Governing pension schemes in the interests of members

There are basically two models of workplace pension.

Last year the Office of Fair Trading (OFT) produced a damning report into the market for DC pensions. But a combination of government and industry responses persuaded them not to take the issue further. Whether these will go anywhere near far enough is now a live issue.

But let’s first go back to the OFT report. This is an extract from  the full report:

The report was serious enough to trigger a full scale inquiry by the Competition Commission which could have resulted in big changes forced on the industry.

But a combination of planned action in response by government, the industry and regulators  was enough to head off this nuclear option.

First the industry is expected to own up to and deal with old pension schemes with high charges. This has started with an audit which certainly reveals some people have savings in some pretty poor schemes. This is part of what it found:

To put these numbers in context the government is capping fees for auto-enrolment pensions at 0.75 per cent. And this chart shows the difference that a 1 per cent increase in charges can make. 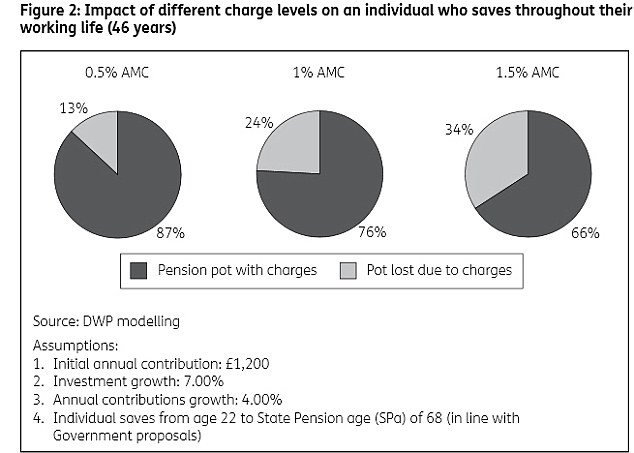 To ensure follow up on this audit and to act in consumer interests the government is legislating to set up Independent Governance Committees (IGCs) to monitor commercial pension providers.

This is probably better than nothing, but there are real doubts about whether it goes far enough.

First there are real problems with IGCs. They are appointed by the pensions companies so are not independent. Nor do they really have all the powers of governance that well-managed trust based pensions have – they can hardly sack their fund managers. I suppose though that they can claim to be committees.

Nor is there any requirement to have an employee/ consumer voice involved in governance, though single workplace occupational schemes are required to have member nominated trustees.

Secondly they don’t fix the basic problem with this market. It will still be employers buying a pension for their staff with no incentive to provide the best deal possible that best suits their staff. Of course some employers will make a careful choice and the auto-enrolment revolution means that there are good options around, but many employers will ask what is the easiest way to meet our regulatory requirements, not what is best for our staff.

This is why Trust based governance makes more sense. Instead of choosing a scheme for their staff, the employer chooses an organisation much better placed than they are to run a pension in the interests of their staff, not anyone’s shareholders. It is likely to have both the scale and good governance that are needed to keep charges down and deliver good outcomes for savers. In addition trust based bodies are much better placed to deliver pension income in retirement and share and pool risk – hard enough when it is between different members of schemes, close to impossible when shareholders want a share too.

This is not to say that all trusts are great. Some are too small, and some so-called mastertrusts that cover more than one employer have been set up by for-profit companies to provide a thin trust-based governance layer on commercial products, originally to exploit short-service refunds that benefit employers not staff . These look more like (not very) IGCs than proper trusts. Nor are all contract-based products poor value, of course. A handful in the largest employers are effectively monitored by good governance committees, and others have been set up by employers who do take care about buying low charge and smartly invested defaults.

Moving to a wholly trust based system will not be popular with insurance companies, but if they are to stick with IGCs then they need to make them work, not leave them looking like a week-old sticking plaster.

The question is who is going to do the challenging? In last week’s policy statement, the FCA held with their original idea of allowing corporate trustees to participate on IGCs. The duties of Corporate Trustees are the responsibility of a firm of Professional Trustees but not the responsibility of a named individual. Expect corporate trustees to be singularly lacking in personal conviction and long on formulaic box-ticking.

If you add to the corporate trustee, the two insurer nominated trustees, you have a block vote of 3 out of 5 trustees that potentially could block any contentious stuff getting either to the insurer or (heaven forbid) to the policyholders.

It’s time for those who value independence to stand up and be counted and to raise their hands.

If a hard core of sympathetic corporate trustees , insurance executives and stooges drawn from the bibulous world of NAPF conferences are allowed to pack these committees, IGCs and GAAs will have the teeth of a new born baby.

This is exactly the kind of outcome that those of us who have always wanted trust based governance to renew our lobbying of governments and regulators as it will confirm our fears. On the other hand IGCs with teeth and genuine independence will inevitably blunt our calls, and cause us to lobby elsewhere.

I was the TUC’s Head of Campaigns and Communications until semi-retiring in May 2015, I started at the TUC in 1994. My interests cover a wide range of communications and politics related issues, but if I have a specialist subject, it's pensions…

2 Responses to Governing pension schemes in the interests of members